Perhaps that’s one way to describe the events and realities of our world today.

Of course, there are other words. The events of 2020 and 2021 have been described as “unprecedented,” “unparalleled,” “unending.” But I think “unexpected” captures it well.

Let’s think about it:

Recently, like you, I’ve mourned the unexpected loss of friends. Many of us on the BSF staff are in daily contact with BSF friends in India, Brazil, Madagascar, Kenya, and other communities where  suffering continues through the rising pandemic. As I reflect on these realities, I have taken comfort from our study of Joseph’s life in Genesis 37–50.

Joseph certainly endured many unexpected realities. At a young age, Joseph’s dreams and expectations were high. Yet it was only a matter of time before those dreams were seemingly dashed and those expectations seemingly crushed. Rather than an immediate and expected ascension to leadership, Joseph unexpectedly endured:

And yet what did God do with Joseph’s unexpected circumstances?

The entire book of Genesis culminates with the truth of Genesis 50:20 as Joseph declares to his brothers, “You intended to harm me, but God intended it for good.”

Even in the most unexpected, most unwanted circumstances of Joseph’s life, God did the unexpected – He brought about good. Joseph’s story reassures us that the Fall, sin, and suffering have not and cannot thwart God’s ability to affect good in our lives. The same Creator God who declared “and it was good” in Genesis 1 is the same Creator God who “intended it for good” in Genesis 50.

Genesis is Only the Beginning

As we fast forward through history and the Old Testament, we find time and time again that God works in unexpected ways, in the unexpected places of life.

No doubt this truth is most profoundly embodied through the Person and work of Jesus Christ,” who is “God with us” (Matthew 1:23).

In fact, as we anticipate next year’s BSF study of Matthew, we proclaim and celebrate the truth that He is our “Unexpected King.”

But how was Jesus unexpected?

After all, in many ways He was completely expected. Since God’s proclamation in Genesis 3:15 that the woman’s offspring would crush the serpent’s head, the Messiah had been long awaited, long expected. However, though the Messiah’s appearance was long expected – even prophesied – many of the details of His appearance were not.

Though the people expected the Messiah to appear in Bethlehem (Micah 5:2), they did not expect He would appear in what looked like scandal (Matthew 1:18-19).

And though the people expected a King (Isaiah 9:6-7), they did not expect this King would be worshipped by pagan star followers yet missed by His own Jewish people (Matthew 2:1-12).

The people did not expect the King’s herald would be a man dressed in camel’s hair eating locusts and wild honey (Matthew 3:1-4).

They did not expect the King’s message would be, “blessed are the poor in spirit … the meek … the persecuted” (Matthew 5:3-12).

What unexpected circumstance do you face today? For me, it is not knowing what to expect as we transition from San Antonio to a new season in Kansas City near our family. Retirement is expected, but I am sure there is much ahead that is not!

God delights – perhaps even specializes – in working in and through the unexpected circumstances of your life and mine. Where we feel most desperate, most fearful, most needy and shameful, God is powerfully present to do the unexpected. 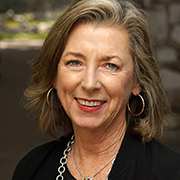 Under Susie’s leadership as executive director, BSF membership has grown to serve more than 385,000 adults and 66,000 children worldwide, and the ministry has introduced BSF Online and WordGo Bible study platforms, and four new studies – Isaiah, Revelation, and People of the Promised Land I and II (Part II coming in 2022). Susie and her husband, Roger, have been married for 45 years and have two children, Jerry and Sally, and four grandchildren.