By Pamela Bunn – BSF Board Member

Recently, a dear friend sat in an emergency room while doctors treated her husband, who had experienced multiple seizures earlier in the day.

As the minutes and silence stretched on, my friend decided to contact the chaplain at her child’s school about a concern that was unrelated to the current crisis.

For the first time in days, my friend, a busy physician and mother of four, was given the unscheduled time to sit, linger and have a much-needed conversation regarding one of her children. As God cared for my friend’s husband nearby and met the needs of her son many miles away, He comforted my friend with His presence as she waited.

God was active all around in the meanwhile.

In the midst of emergencies, challenging work, difficult relationships, significant change, or the uncertainties of a pandemic, we naturally become absorbed in our current situation. We ask, “What should I be doing? What do I need? Where should I focus?”

And while we concentrate on the immediate task that demands our attention and energy, we often fail to see what God is doing in the meanwhile. When we pause, step back, and consider our broad, high, transcendent God, we get a glimpse of His bigger picture and marvel at it. Our Omniscient God has His hands in every event and works in all of our meanwhiles. He is never overwhelmed. He sovereignly orchestrates all things for His good purposes, whether or not we ever see or understand them. When we look to the sky and see the thick of clouds, we know that behind them His light still burns intentionally and bright.

From Genesis to Revelation, God’s Word is full of His work in the meanwhiles.

In Genesis 29, Jacob worked to win his wife, Rachel. During the next 20 years, he navigated his father-in-law’s deceptions, raised a family, built a thriving livestock herd and planned to return home. Meanwhile, unseen by Jacob, God was using these years to untangle Jacob’s past problems in Canaan.

In Genesis 32, as he prepared to meet his brother, Jacob anticipated an attack from Esau’s men. During a sleepless night, he was consumed by “great fear and distress.” Meanwhile, God had gone before Jacob to soften Esau’s heart.

In Genesis 50, Joseph summarized his grasp of God’s work in his meanwhiles when he told his brothers, “As for you, you meant evil against me, but God meant it for good, to bring it about that many people should be kept alive, as they are today.”

Throughout Scripture, God gives us glimpses of His sovereignty that encourage us to trust Him more deeply.

In Egypt, the Israelites groaned in slavery. Meanwhile, in Egypt as well as the desert, God was preparing Moses to deliver them from their captivity.

When Israel demanded a king, God gave them Saul. Meanwhile, He prepared David in the sheep fields to be a man after His heart and later take over the shepherding of His people.

And toward the end of the Old Testament, God seemed silent, sending no new prophets for 400 years. Meanwhile, He was preparing the world for the Messiah, His beloved Son who would die to redeem His people.

The Lessons We Learn

God works in ways visible and invisible. He is ever present and never confused. He handles every situation coincidentally, the known and the meanwhiles, neglecting none, and perfectly bringing about all He ordains. As with the Israelites of the Old Testament or the believers of the New Testament, God is accomplishing many things:

He expands our understanding of His ways – they are vast, eternal and always good.

He increases our appreciation of His power – it is limitless, ordered and never arbitrary.

He enriches our worship of His greatness – His thoughts are beyond our thoughts, and His love has no bounds.

The same God who upholds the stars is working beyond what we see. He is the author of our meanwhiles. As He places kings, prime ministers, and presidents in authority, He also strategically places each of us where we are.

When we feel thrown off balance, stretched by demands on our time and efforts, we can remember the meanwhiles of Genesis through Jacob and Joseph.

We can ask, “How might God be working in my meanwhile? Is He refining a skill? Testing my faith? Adjusting my attitude or reordering my affections? Developing steadfastness and maturity? Meanwhile, what is He revealing about Himself?”

Though we cannot understand all of God’s plans, we can trust that His work stretches beyond what we see. As we prepare our hearts and minds for Matthew, let’s take some time to reflect on God’s work during the past year. We can rest assured there is meaning in every meanwhile to come. 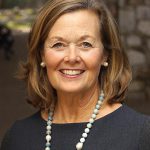 Pamela Bunn grew up in St. Louis, Mo., graduated from the University of Virginia with a BA in English, and started BSF as a near newlywed in 1982 in St. Petersburg, Fla. After moving to her husband’s hometown Raleigh, NC in 1986, she served as a GL, an STL, a TL and an Area Advisor for eastern North Carolina and South Carolina, until 2013 when she joined the BSF Board of Directors. She served on the St. David’s School Board of Trustees in Raleigh for twenty years, and has been a Director for Benjamin F. Edwards & Co in St. Louis since 2010, where she works part time as a special advisor to the executive division. Pamela writes a daily devotional blog, astherainandsnow.com (inspired by Isaiah 55:10-11), delighting to combine her love for words, God’s Word and her photography of God’s creation. She and her husband, Lee, live in Naples, Fla., and are active in teaching, discipleship and shepherding ministries, especially with young couples. They have three adult children, two daughters-in-law and five grandchildren.