God’s Word is a ‘Lifeline’ for COVID Chaplain

“I don’t know if I could do another year of what I just did,” longtime BSF member Kevin Deegan said. “I feel like, especially one year later, we need new words to describe how we feel. We used words like crazy, unprecedented and exhausted way too early in the pandemic.” Now, Kevin and his colleagues are simply out of words to capture the intensity of their experiences this year.

A little over a year ago, Providence Holy Cross Medical Center in Los Angeles, Calif. made the unimaginable decision to close their hospital doors to all visitors. Kevin, a chaplain in the Step-Down Intensive Care Unit at Providence, found himself taking on an unexpected role as his floor was transformed into the COVID unit.

“I became ‘the COVID chaplain,’” Kevin said simply. “Since then, we’ve had COVID patients on every floor of our hospital, and so every chaplain has become a COVID chaplain. But I like to say I was the first.”

Before COVID, Providence averaged about 50 deaths in a month, but this January alone, amid the height of the COVID crisis, the hospital reported 127 deaths. A chaplain is required to not only be at every death, but also all other crisis events, including code blues (when a patient’s heart and breathing stop) and trauma cases, to support suffering patients and anxious families.

This year, to say Kevin and his team of chaplains are stretched thin is an understatement. Their roles have changed drastically, their hours increased, and the emotional toll is exponentially higher.

But through the exhaustion and pain, God’s Word has steadied this team, and Kevin has personally experienced God’s guidance in desperate moments. 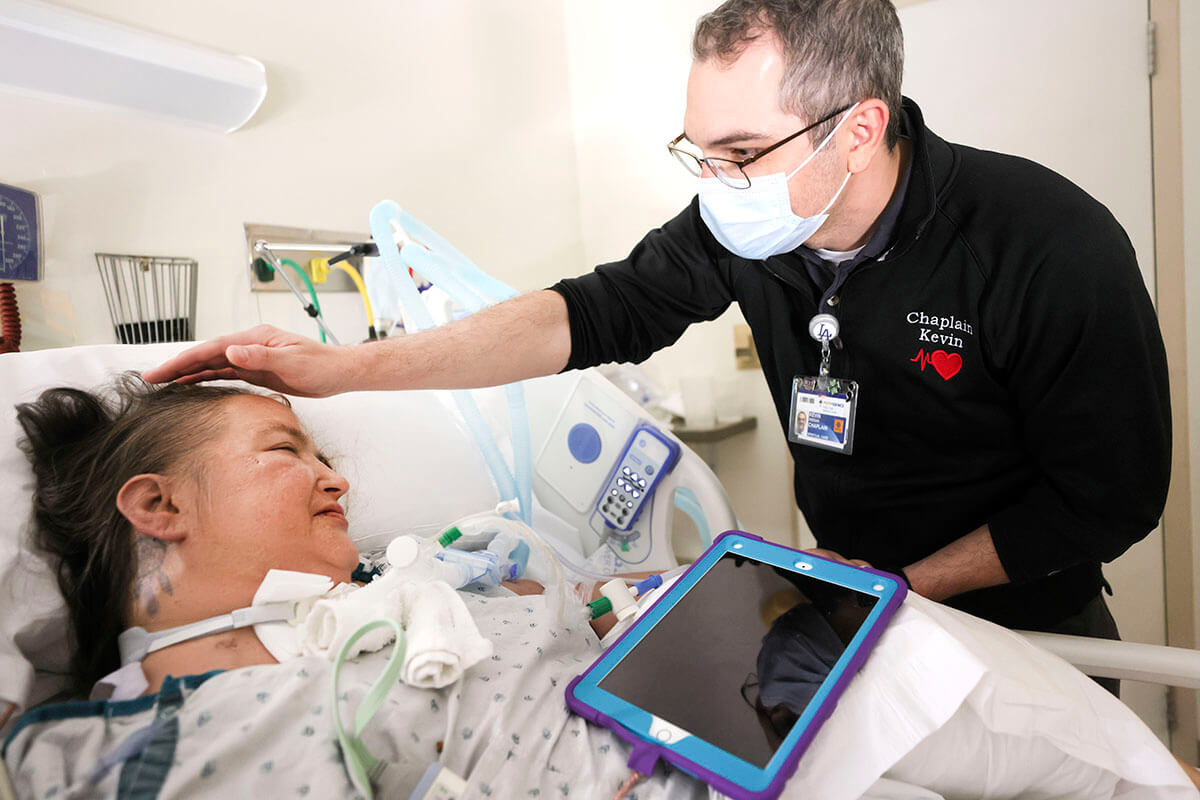 Early in the pandemic, when a daughter was told that her father would not recover, she immediately drove to the hospital, hoping for a chance to see him. When she arrived, her access to the COVID unit was restricted. Walking to meet her, Kevin spontaneously decided to FaceTime the doctor, who turned the camera to her dad. In that moment, Kevin watched a daughter find healing and closure as she said goodbye to her father.

“I’ll cherish this,” she told Kevin.

With this experience in mind, Kevin took an idea to his manager — to purchase iPads for the department. The chaplain team pivoted their ministry to a virtual setting.

“For almost a year now, I’ve walked the halls with the same iPad every day, and I’ve been inundated with these video requests and keeping families connected. A lot of my job has changed to that,” he explained.

Chaplaincy, as Kevin views it, is a ministry of presence, meant to embody compassion, empathy and support in times of crisis. “To take that theological foundation of my work as chaplain and translate it to a virtual setting, where I’m not technically in person, is that still going to have the same impact? Is it still going to resonate?” Kevin worried.

To their surprise, adapting to virtual chaplaincy has opened their eyes to previously unreached patients and family members.

Providence Holy Cross Medical Center serves a lower socioeconomic, and high immigrant, population. Once Kevin began doing video calls with family members, he realized that many of them lived out of the country or would have been unable to come into the hospital because of other factors such as work schedule or caring for children.

“So even if we completely go back to normal where visitation is back the way it was, I still think there’s a way for us to keep families connected virtually that we weren’t thinking about before,” Kevin said. “I still want to be able to offer that because I think it’s part of the whole person healing that we’re seeking.”

Having been in BSF for 17 years as a class member, Group Leader, Children’s Leader, Class Administrator and, most recently, online group member, Kevin had a head start in translating spiritual support and discussion into a virtual environment.

“In the same way that BSF has had to translate the intimacy of a group [online], I’ve had to learn the intimacy of connecting with the family virtually,” Kevin said. In fact, Kevin reported that his online group experience has “actually been the deepest group discussion that I’ve been a part of at BSF.”

Kevin attributes his ability to adapt to new circumstances and lead others spiritually through crisis to the framework he learned throughout his BSF experience.

When Kevin first joined BSF in a Young Adult group after high school, his life was on a different track. He had never been a great student and was pursuing a career in acting, never expecting to return to any sort of higher education. However, through learning to study God’s Word each week with the daily lesson questions and discussion groups, Kevin had an epiphany:

“Maybe I’ve just been studying the wrong things. … Maybe I have a passion for God’s Word,” he realized. “That [passion] really evolved through my participation in BSF and certainly my participation in leadership. Through BSF and a few mentors in my life, I discerned a call to ministry and went back to school because of the foundation or the experience of having done some studying with BSF,” Kevin shared.

For Kevin, BSF was the place where he built a foundation for learning to do ministry well and to be in spiritual leadership. “I feel like I’m equipped well to do this work. Even when we’re going to uncharted territory as we have this last year, because of BSF, because of that strong foundation that was built, I feel confident to continue to meet those needs,” he said.

Through this year’s Genesis study, Kevin has seen God’s Word come to life as he minsters to patients, families and medical staff.

“As a longtime member of BSF, I have come to believe that God’s Word is ‘alive and active.’ So, I expect whatever we are studying in BSF to come up in my week,” he shared. “I have been impacted by all the family and relational dynamics throughout Genesis. Managing family dynamics is part of my work as a chaplain, but I have also been encountering difficult relationships in my personal life. God is in the business of transformation and reconciliation.”

Secure in God’s Word, Kevin and his team approach each day with confidence in His direction and provision.

“There is another presence with us, that’s the Spirit of God with us, protecting us,” he said. “We will come out of this whole.” 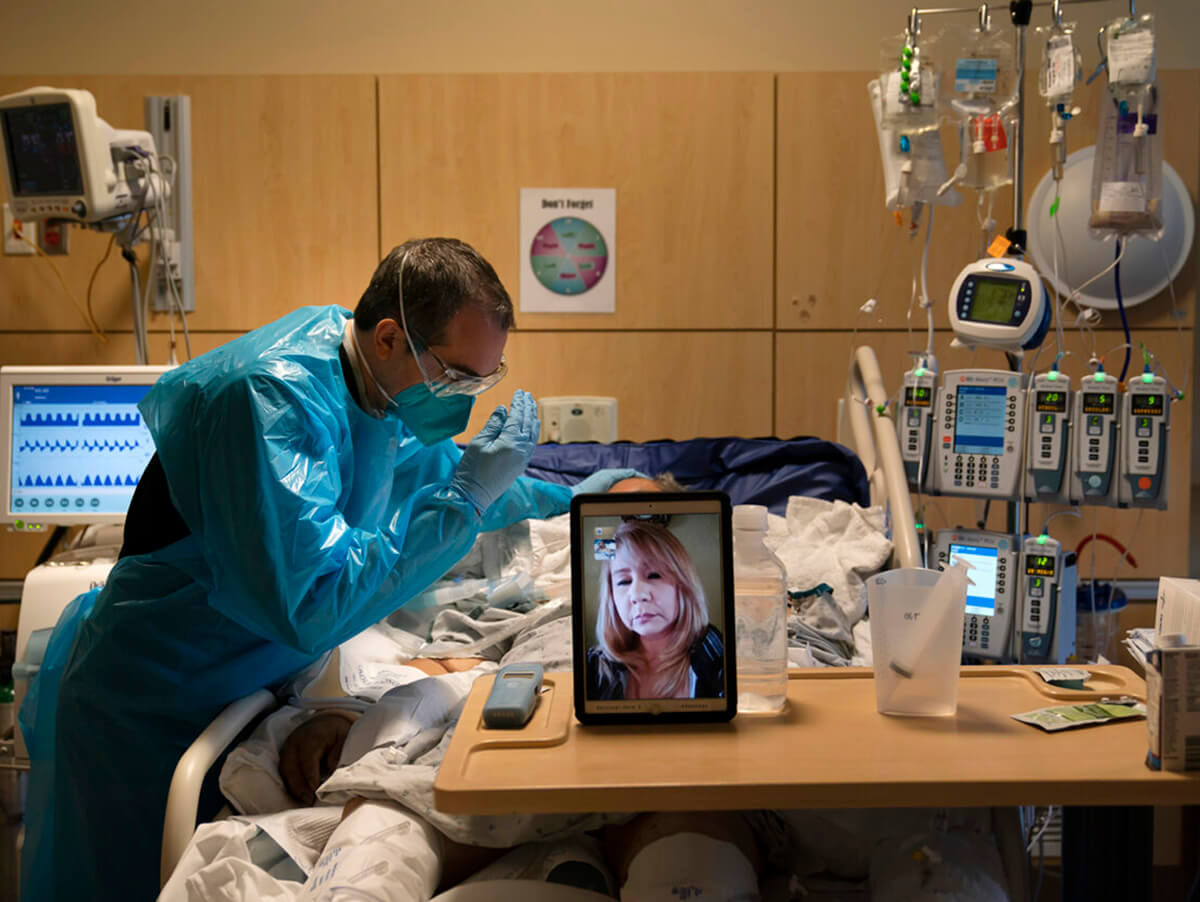 Learn more about BSF at https://www.bsfinternational.org/. 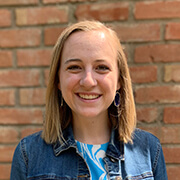 Bethany Peterson is an editorial assistant at Bible Study Fellowship Headquarters. She is third generation BSF-er and a native Texan. She joined BSF after graduating from Wheaton College where she studied spiritual discipleship in a digital world.