“… we will tell the next generation the praiseworthy deeds of the LORD, 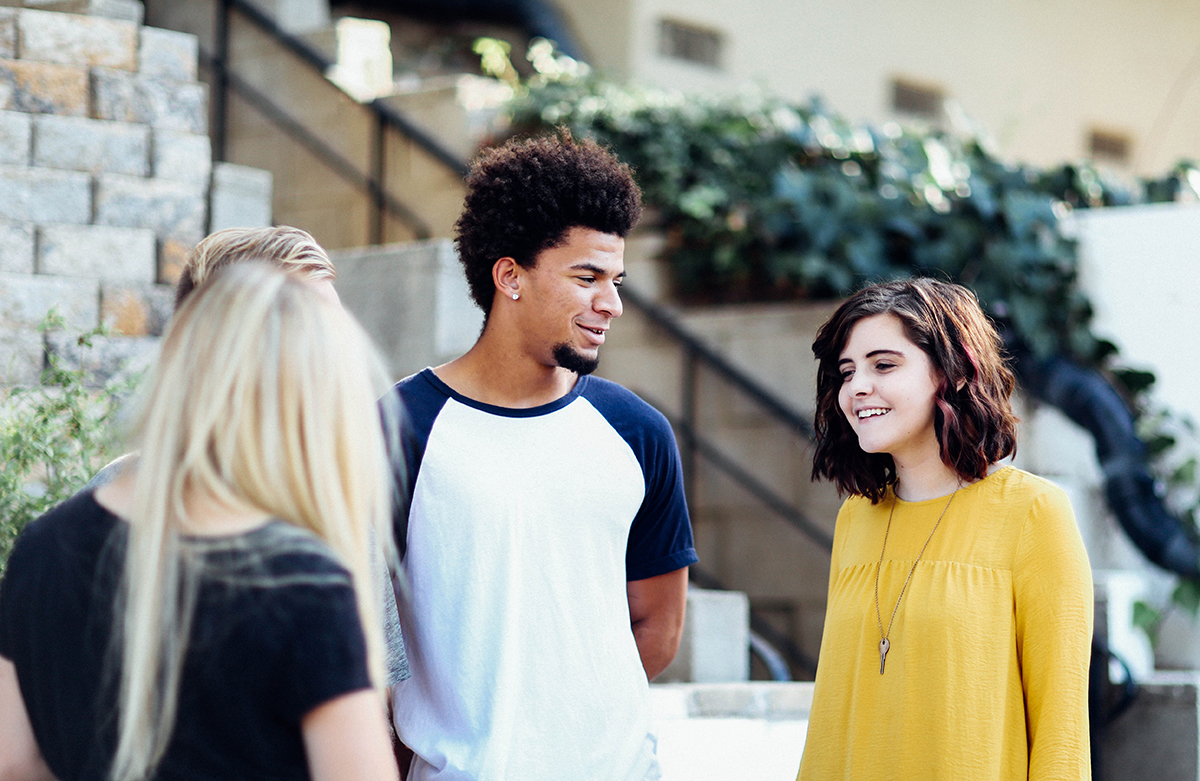 I recently asked my son what he wanted to be when he grew up.

Expecting to hear the words “doctor,” “engineer” or “behavioral scientist,” he quickly dashed those hopes.

Meanwhile, my daughter burst out laughing as she scrolled through my iPhone pictures and said, “Aww … what a cute old-people selfie!” When I asked, “What’s an old-people selfie?,” she fell on the floor in hysterics. 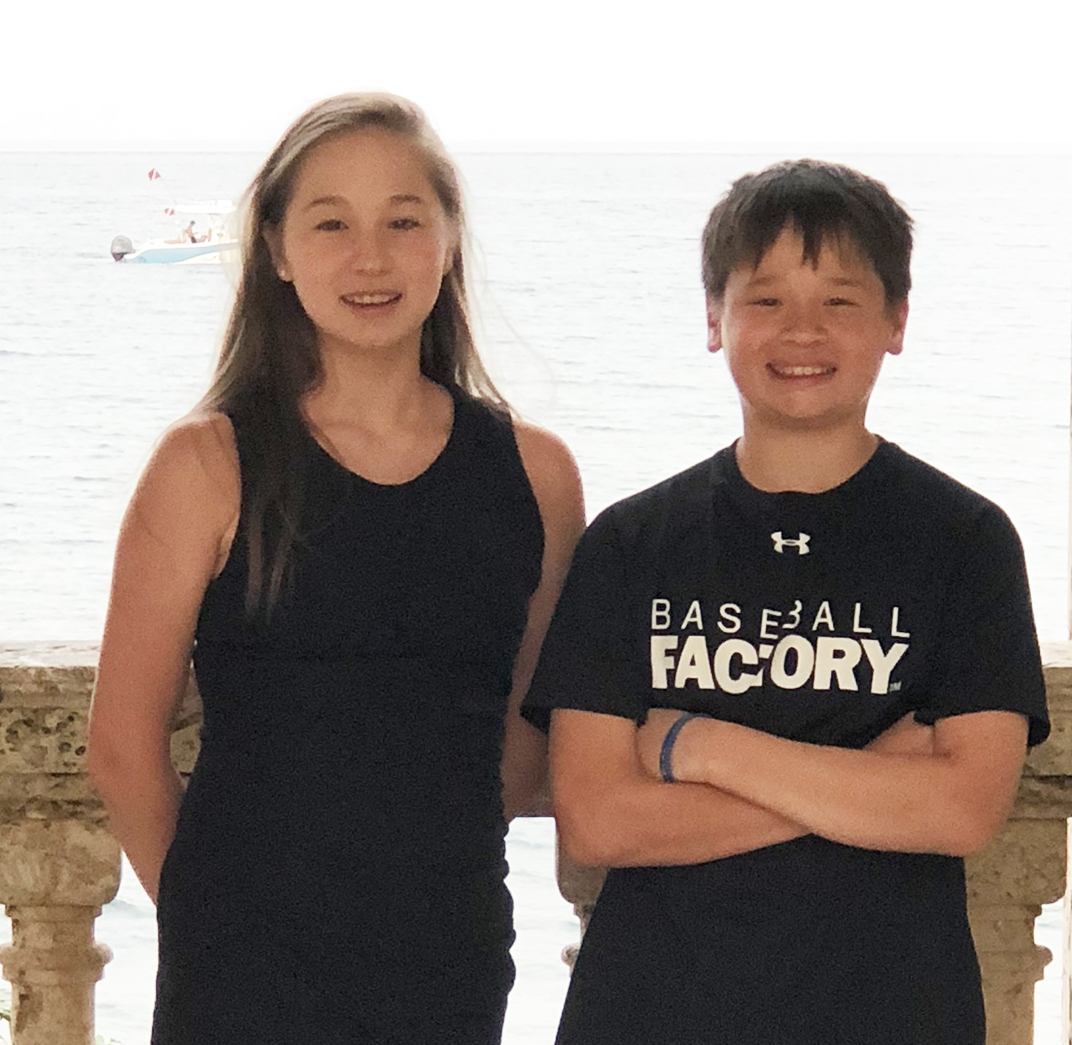 (Apparently, an “old-people selfie” is a photo of your entire face. Young people intentionally crop out half of a face to make their photography more interesting.)

Gen Z are those born from 1999 to 2015. This generation currently constitutes the largest percentage of the country’s population, eclipsing American Baby Boomers, who held the majority for close to 50 years.

The old order is fading, and the new order is growing.

What do Gen Zers believe?

The U.S. marketing research firm Barna Group says that unlike previous generations, when it comes to religious identity, only 4% of Gen Z have a biblical worldview.

The percentage who identify as atheist – 13% – is double that of all U.S. adults. That may seem like a small number, but Americans are saying, “there is no God” at increasingly younger ages. 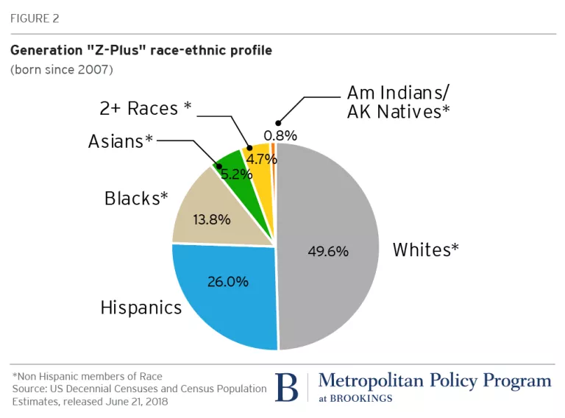 According to Pew Research Center, the “nones,” or people who do not identify with any religion, are at the highest percentages in history. This includes 23% of all U.S. adults and 35% of U.S. adult Millennials, a trajectory that Gen Z will continue.

And more than half say that happiness is their ultimate goal in life, which equates to financial success. 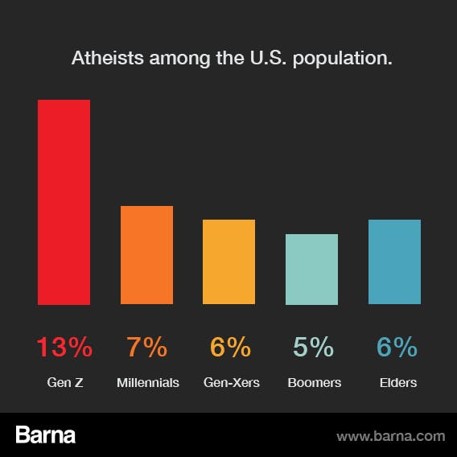 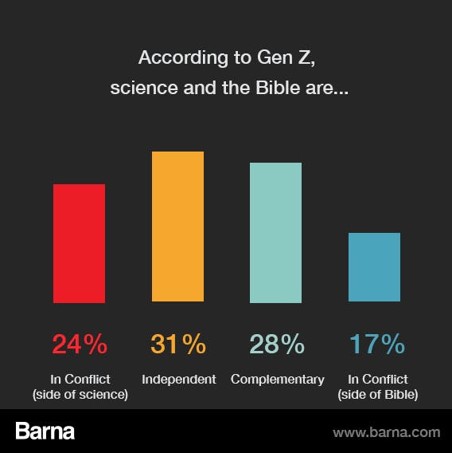 Gen Z is the first generation to have been exposed to smart technology and social media from birth. According to Barna, 57% of kids and teens look at the screen four or more hours per day; 26% spend eight or more hours a day on their devices – that’s an entire work day!  (My son requires an entire power strip to charge his devices!)

In this digital world and as a result of social media, we have entered the era of the “democratization of influence.” In previous generations, family heritage and upbringing were the top influences in forming a person’s identity. But Barna reports that Gen Z ranks these fifth.

While family, teachers, pastors or coaches used to be the primary voices of influence, we now compete with a multitude of worldviews streamed directly to kids’ devices. This generation is being discipled by their smart phones, YouTube and Google.

This generation is being discipled by their smart phones, YouTube and Google.

As a result, Gen Z is exposed to a false sense of reality. YouTubers often spend hours editing videos to portray a personal brand. On social media, kids are less likely to cultivate meaningful relationships because of an increased pressure to create a flawless, happy, successful or funny persona.

The same technology that was designed to “make the world more open and connected,” which was Facebook’s original mission statement, is helping kids disengage from physical communities and relationships.

Therefore, it should not surprise us that we are seeing an exponential rise in depression and lonliness.

Surprisingly, Barna research shows that this young generation – whose top priority is attaining happiness and financial success – is willing to ask difficult questions about the meaning of life. The study reports that the rise in moral relativism, or the lack of a strong moral code, arises more from a confusion about truth than an actual rejection of it.

So, this generation is not necessarily rejecting the God of the Bible. They know little about Him.

What an opportunity! In love, patience and understanding, let us help them see the Lord.

Judges 2:10 reminds us that there were consequences when the Israelites failed to instruct their children in the ways of the Lord.

“After that whole generation had been gathered to their fathers, another generation grew up, who knew neither the Lord nor what he had done for Israel.” (Judges 2:10)

Let us not repeat that.

My hope is that God’s Word awakens an excitement to reach the next generation for Christ, instilling a sense of purpose and mission in each and every one of us.

We do not have to know all the answers. We can simply share what God has done for us. Through our time in God’s Word in our BSF studies, we have much to share!

As we look beyond ourselves, let us be willing to engage – not just with our minds and our theology, but with a humble heart, free of judgment. We can have a heart that is willing to say, “I don’t know all the answers. But I know that I love you. Let’s search for the answer together.”

“My people, hear my teaching; listen to the words of my mouth.  I will open my mouth with a parable; I will utter hidden things, things from of old – things we have heard and known, things our ancestors have told us. We will not hide them from their descendants; we will tell the next generation the praiseworthy deeds of the LORD, his power, and the wonders he has done. He decreed statutes for Jacob and established the law in Israel, which he commanded our ancestors to teach their children, so the next generation would know them, even the children yet to be born, and they in turn would tell their children. Then they would put their trust in God and would not forget his deeds but would keep his commands.” (Psalm 78: 1-7)