A fter a deep breath and a quick prayer, Peggy Sansbury walked to the podium. Soft light from the windows and fresh paint gave the long-abandoned Nazi interrogation room new life and a new purpose.

In January 2017, Peggy’s South Carolina pastor invited her to speak at a ministry conference in Bulgaria, sponsored by an Eastern European ministry called Mission Possible. As a former BSF teaching leader, Peggy felt comfortable in front of large crowds. But this was different. She wasn’t lecturing to her familiar Day Women’s Class, sharing with long-time BSF friends. Close to 50 Eastern European pastors, their wives and a team of interpreters gathered to hear Peggy speak about biblical marriage.

“I thought, ‘Are they going to accept me, especially as a woman teaching God’s Word?’ But it was amazing how God broke through their hearts, especially in a male-dominated society. I doubt they had ever heard biblical teaching on marriage before, and it was absolutely thrilling to see God work through this particular message,” Peggy shared.

“My role was to sow the seed that marriage should be a loving relationship, where the husband doesn’t dominate his wife, but loves her as Christ loves the Church. I was also blessed to see the wives come out of their little shells of shyness with a new hope that they could respect their husbands and experience joy in the process”

Though Bulgaria achieved its freedom in the early 1990’s, the landscape is still marked by a few dilapidated army tanks and war-torn buildings. Broken-down Nazi vehicles are painful reminders of the German invasion during World War II, followed by 46 years of Soviet occupation. During that time, the Soviet government inconsistently treated Christians with limited tolerance and open persecution.

One pastor at the conference remembers government officials raiding his father’s underground church meetings. As worshippers fled into the night, police ripped his mother’s beautifully hand-sewn banners, hung to help shield the services from authorities. Despite this persecution, church members continued to gather and laid the foundation for a new generation of believers in the area.

“These people came out of the Iron Curtain and have only been free for 27 years,” Peggy said. “Imagine that! I was speaking to first-generation Christians, including a few who were part of the underground church. Everything in their ministry is built on faith, so pure and so strong.” 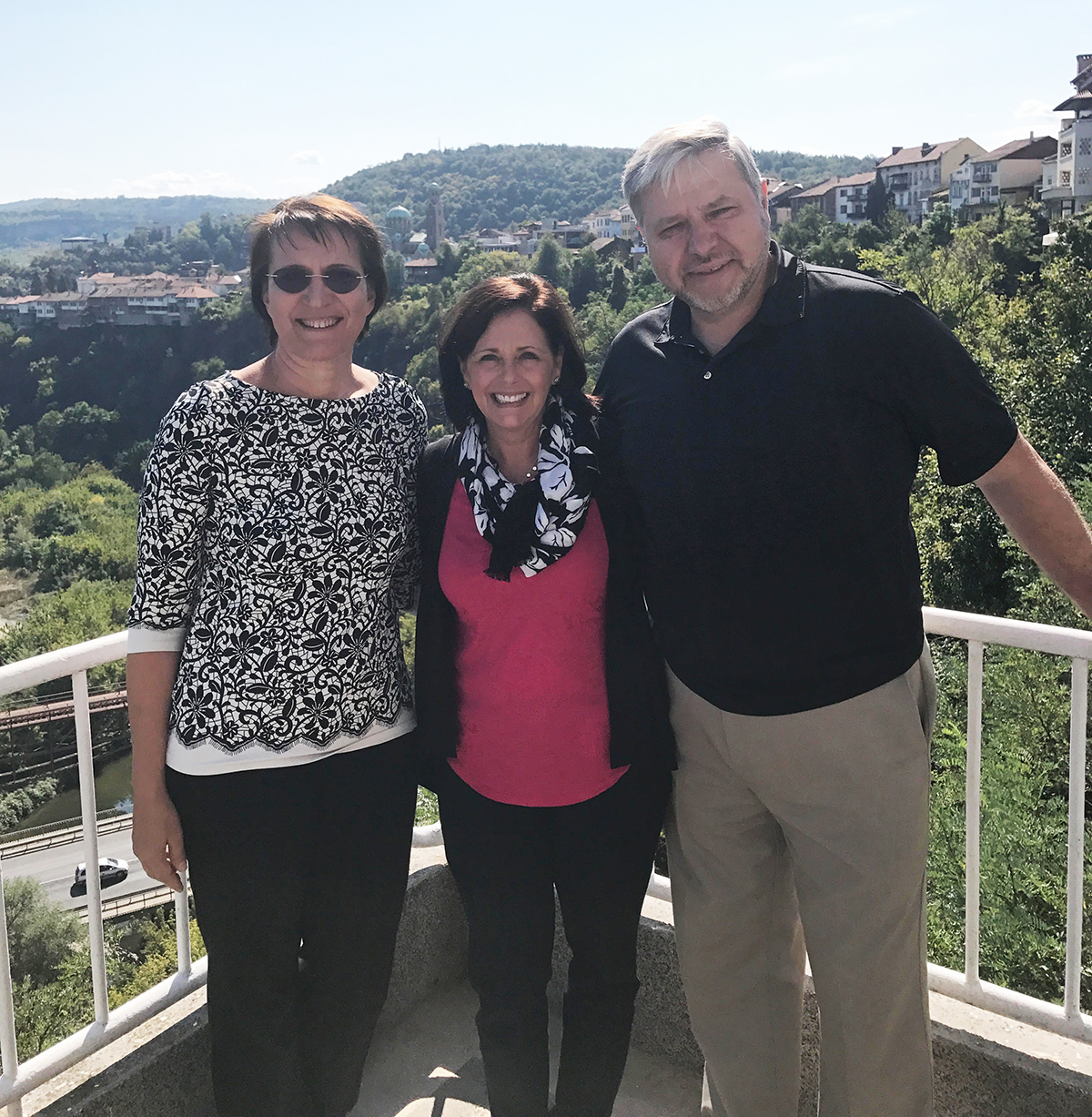 Peggy (center) with the leader of Mission Possible and his wife in Bulgaria.

Peggy (front, center) with team members, Mission Possible leaders and local volunteers from the conference.
Separated by language, culture and experience, Peggy wondered if her prepared talk would resonate. But the same Holy Spirit who worked in her South Carolina BSF class spoke into the hearts of her Eastern European brothers and sisters.

“As we worshipped together, it was almost as if we spoke the same language. The Spirit of God gave us an immediate bond. And afterward, we just loved on one another, grabbed interpreters and shared how God was working in their countries and in their personal lives,” she said.

“You don’t think about it while you’re in BSF, but it’s so true. BSF is a season of preparation for a lifetime of ministry,” she said. “I took all the power tools that had been instilled in me through BSF – learning to hear that still small voice as you read the Word, love for God’s Word, homiletics, how to prepare a lecture, how to do research – and I activated them in this new season.”

A season of preparation

In 1989, Peggy’s friend invited her to attend the new BSF Myrtle Beach, S.C., Day Women’s Class. A stay-at-home mom to young children, Peggy was searching for a deeper connection with women in her community. What she gained was a rich relationship with God through His Word.

“While you’re in BSF, you get all these goodies put in your hands. You get questions each week with the notes attached, the home training lessons, the opportunity to attend seminars. I know I’ve been given so much in BSF, and ‘to whom much is given, much more is required,’ ” she quoted from Luke 12:48. “If you’ve been in BSF for six weeks, you’ve received more spiritual training than most people around the world. I would encourage every BSF class member to glean everything they can and don’t skimp on it.”

After teaching her Day Women’s Class for 11 years, Peggy felt a clear call to step down. Though the decision was painful, she trusted God to use her in a new season of service. A year later, down to the week, Peggy’s pastor asked her to participate in the Bulgarian conference.

“During that year of sabbatical, I really grieved. The women in that class were my friends and prayer partners,” she said.

The Lord showed me time and time again during the year that our spiritual journey is like the seasons of the year. We have spiritual summers, falls, springs and winters. I felt as if He was showing me that you can’t be on the front lines and yield fruit all of the time. There has to be time for rest.” 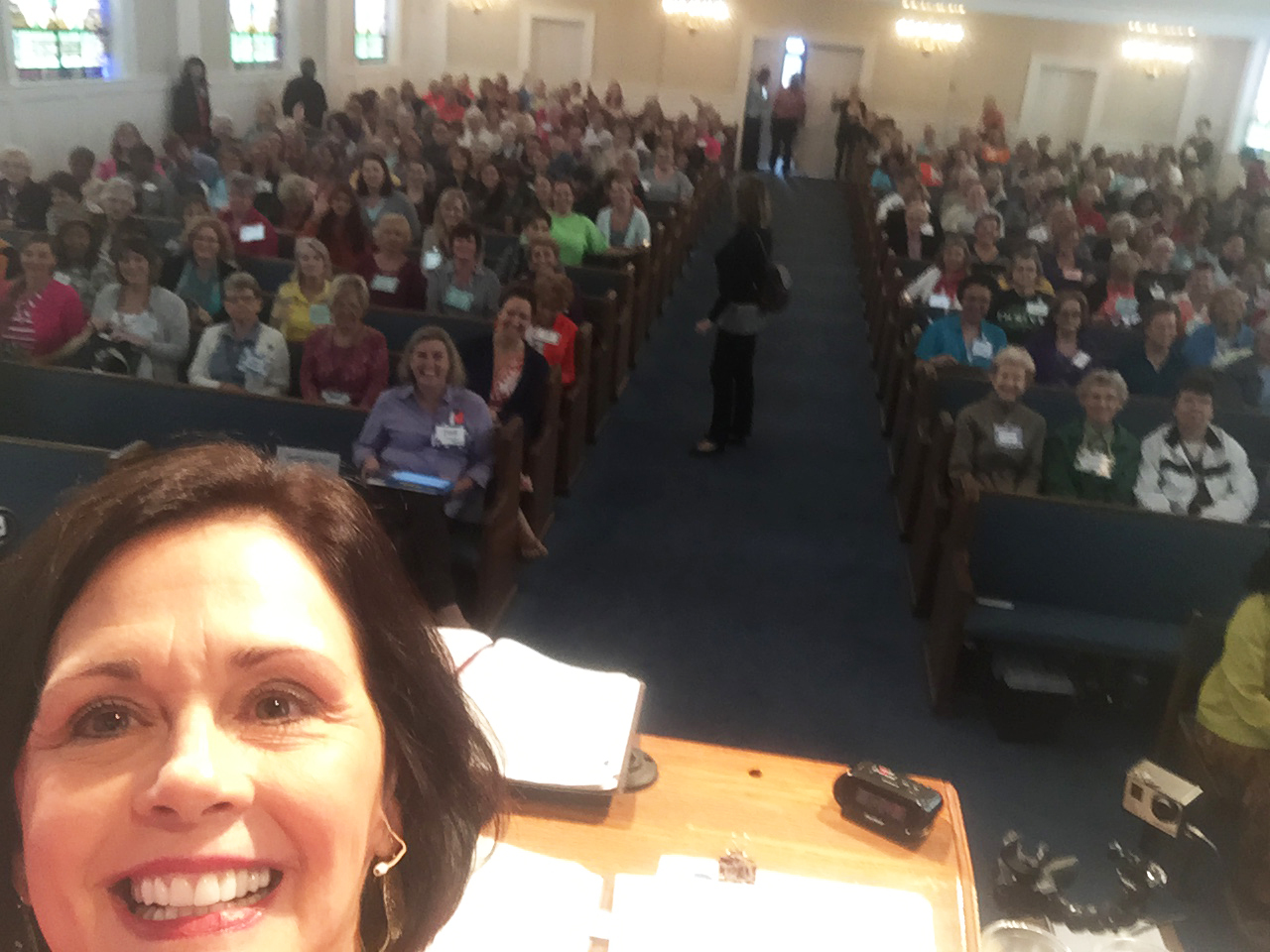 A lifetime of ministry

For Peggy, the call to Eastern Europe was unexpected, but God used her new life-stage as an empty nester to expand her ministry opportunities.

“I felt like God was pulling me off of one place on the battlefield and transferring me to another,” she said. “I’m still on that same battlefield, fighting the same enemy. I just want to be obedient. When I’m buried, I want to breathe my last breath doing God’s will.”

BSF allowed Peggy to learn, grow, connect and develop. During those 26 years, she served, prayed, taught and poured into those around her. With a new-found passion for the Eastern European church, Peggy is using those same skills in a new context.

In BSF and beyond

In BSF, one of our core values is to develop a “Passion for Christ,” where “our love of Jesus fuels our commitment to advance the cause of Christ.” We long to see God glorified around the world through in-depth Bible study, but we know study will only take us so far.

It’s through you, the men and women dedicated to serving in Jesus’ name, that His truth is proclaimed.

Whether we volunteer at our local BSF class or serve around the world, God calls each one of us to use our unique gifts and talents to actively advance the cause of Christ.

“Be ready in and out of season, and whatever season you’re in, embrace it,” Peggy said. “Sparkle wherever God places you, don’t give up. He provides the power for you to keep fighting for the gospel of Jesus Christ.”