Where is God when your world is shattered?

But as quickly as Samuel is there, his image fades into a memory. Just nine months ago, Samuel was involved in a traffic accident outside their home. Samuel did not survive, and his mother’s grief is still raw.

In the early days after her son’s death, Catherine found solace in the nearby field as a place to wrestle with her thoughts.

“I wasn’t feeling angry at God. I knew God was angry too. But I did feel a general sense of anger, a sense of ‘Why?’” Catherine said. “Why is he gone when I can see him so clearly in my mind’s eye?”

During one of those quiet walks, with her anguish exposed, Catherine realized she was not alone. 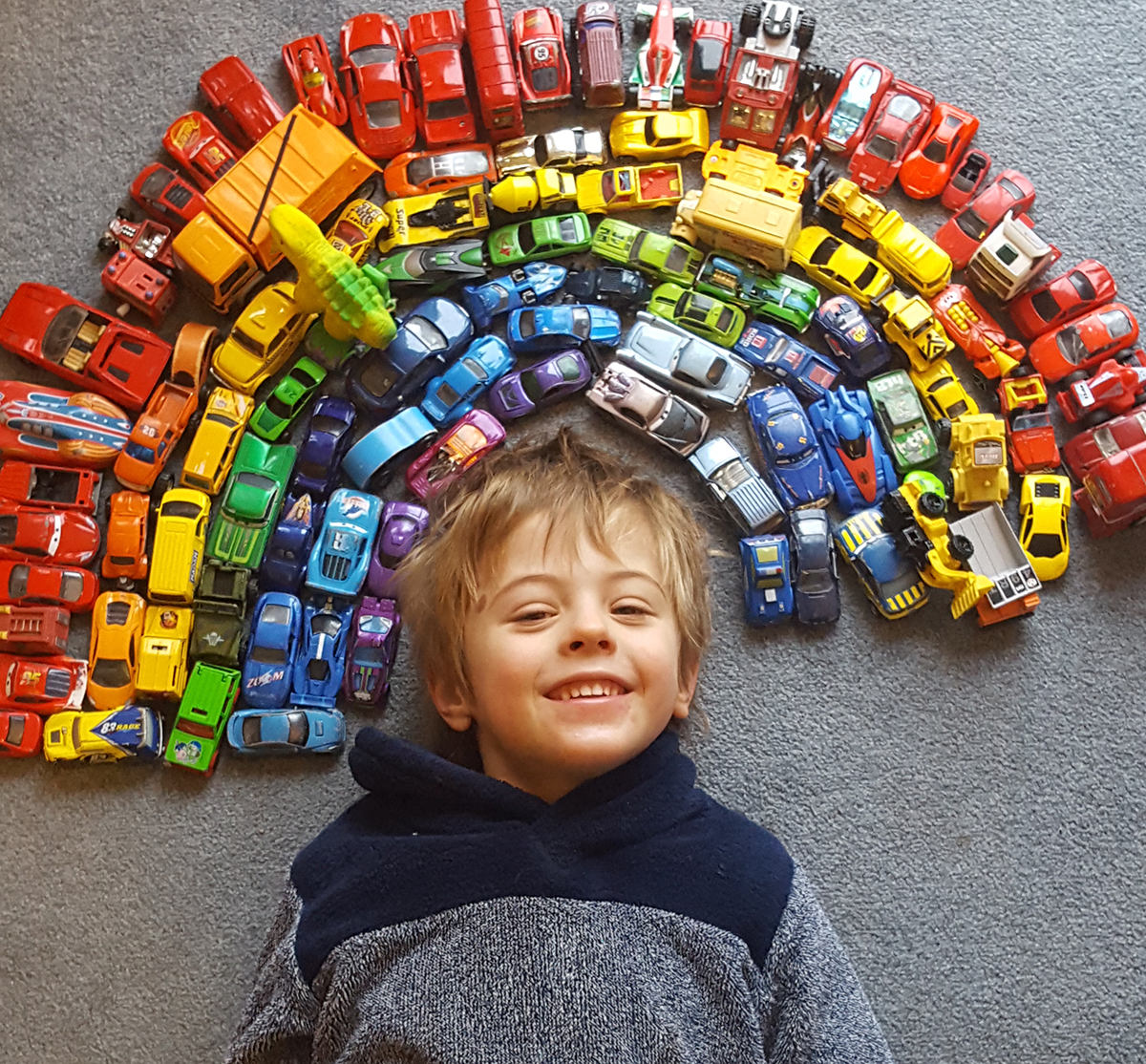 “It was God’s way of saying to me, ‘Don’t be sad that Samuel isn’t here anymore. He is better off where he is. He is alive!’

“There have been so many times when God has put an unexpected verse or Psalm into my head. Only He can do that.”

Another surprising moment with the Lord came just hours after Samuel’s death.

“Words can’t describe how I was feeling that first night. But God put joy into my heart to the point that I was actually smiling eight hours after it happened. That’s not human. No amount of human willpower can do that, it was just from God.

“What put that smile on my face is the assurance of where Samuel is. As a parent, you’re never happier than your saddest child. If your child is unwell, you hurt too. Samuel will never be my saddest child. To a grieving mother’s heart that is the best balm you can give. I do get really, really sad, and I miss him. But what I can also do is tell myself the fact that biblically he’s not lost. He’s with Jesus.”

For Catherine, her husband, Jim, and two other sons, Samuel’s death revealed the gravity of pain in a fallen world. Now, more than ever, they cling to the assurance of God’s promise to restore all things.

“This world is a shadow, a beautiful shadow, but a shadow nonetheless of what is to come. Life is very precious, but life is not all there is. No matter how much I used my head knowledge before, I couldn’t long for the hope of heaven. But my experience of suffering has widened the difference between this life and how brilliant heaven is going to be – no death, no grieving, not distracted by our own sinful desires. We will be dressed in clothes of righteousness standing in the holy presence of God.”

Though her grief runs deep, Catherine’s joy and hope run deeper. Through the loss of her precious son, Catherine’s relationship with Christ is her lifeline to wake up in the morning, snuggle with her sons, laugh with her husband and comfort Samuel’s friends.

Prepared by His Promises

Pointing to distinct moments before Samuel’s death, Catherine fully believes God prepared her to shoulder the sadness and glorify Him in her pain.

Through years of in-depth study as a BSF children’s leader, God equipped Catherine through His Word. He planted His promises in her heart and built a faith to weather the storm.

Studying Genesis several years ago taught her obedience and reading through the Gospel of John deepened her conviction of God’s love. In 2019, while studying 1 Samuel 1, Catherine’s Teaching Leader posed a difficult question.

“She asked, ‘Are you willing to give God the thing that’s most precious to you?’ and of course, my children immediately came to mind,” Catherine said. “I was thinking, ‘Can I really offer my children to God?’

“At the time I couldn’t, and it really bothered me. Weeks later, I clearly remember going through my routine of praying in the boys’ rooms after they went to bed. I was in my older son’s room, kneeling to pray, and I was finally able to let go of my children and give them back to God. I had my hands up. I said, ‘Take them Lord, they’re Yours.’ In my heart, I accepted that God could look after them better than I ever would. I knew that to surrender them to Him would be the best thing I could do for them.”

God used that moment to strengthen Catherine’s dependence on Him, and after Samuel’s death, Catherine held onto His unshakable promise in Genesis 8:22: “While the earth remains, seedtime and harvest, cold and heat, summer and winter, day and night, shall not cease.”

“God promised springtime and harvest for generations to come. Every time we get a load of acorns on the oak tree, I know I can cling to the Maker of heaven and earth,” Catherine said. “Sometimes at night I go out to look at the silhouette of a tree against the night sky and see the stars. It’s so comforting to know He made those stars and we’re not out of His control. My experience isn’t outside of His experience. He’s got this, and he’s also got Samuel.”

Faith in His Future

As we study God’s words to Noah in Genesis 8–9, we reflect on the familiar sign of the rainbow, signaling that God keeps His promises in spite of our sin.

Noah’s sacrifice in Genesis 8:20 and God’s controlled wrath in Genesis 9 remind us of a later covenant, forged by the blood of the ultimate sacrifice. Instead of an altar, we can cling to a cross and instead of a rainbow we look to an empty tomb. In His covenant with Noah, God promised restraint. But in His covenant through Christ, we are promised redemption.

And with that assurance, Catherine can rest in the mercy of her Heavenly Father.

“I knew I could trust Him. If He sent His son to die for me, I could trust Him with mine,” she said. “When God took Samuel, He had already prepared my heart. He waited until I was ready to trust.”

Though Catherine’s grief cannot be undone on this earth, she clings to the promise of eternity.

For each of us, suffering is real and loss is inevitable. Like Noah, waiting for God to open the door of the ark, we may feel the storms of life tossing us in every direction. But the words of Genesis 8:1 give us insight into God’s character:

As His people, we too have confidence that God remembers us.

“For those who feel like they’re stuck in the boat, I would encourage them to remember who God is,” Catherine said. “Remember how He has already shown His faithfulness to you or others you know. Read stories from the Bible that remind you of God’s faithfulness. Very often, God gives us work to do while we wait for Him. Trust the Lord and His timing, He won’t forget you. The rainbow in the sky is a message from God to all creation that says, ‘I’ve not forgotten you. I remember you.’”

Having attended BSF from his infancy, Samuel was grounded in God’s Word. At the age of 6, Samuel wrote a Psalm. In squiggly pencil handwriting, he captured the purity of God’s love for His people. After his death, Samuel’s Psalm circulated through the Barker’s local community, international friend group and beyond. As we thank God for Samuel’s life, we must also thank Him for Samuel’s faith.

“I used to pray for Samuel, that he would be a great man of God,” said Catherine. “That God would bless him early with a true faith that would stand the test of time. He was never the great man of God I expected, he didn’t become a minister or anything like that. But what he’s done has touched more people than we could ever have imagined. I’m grateful for that.” 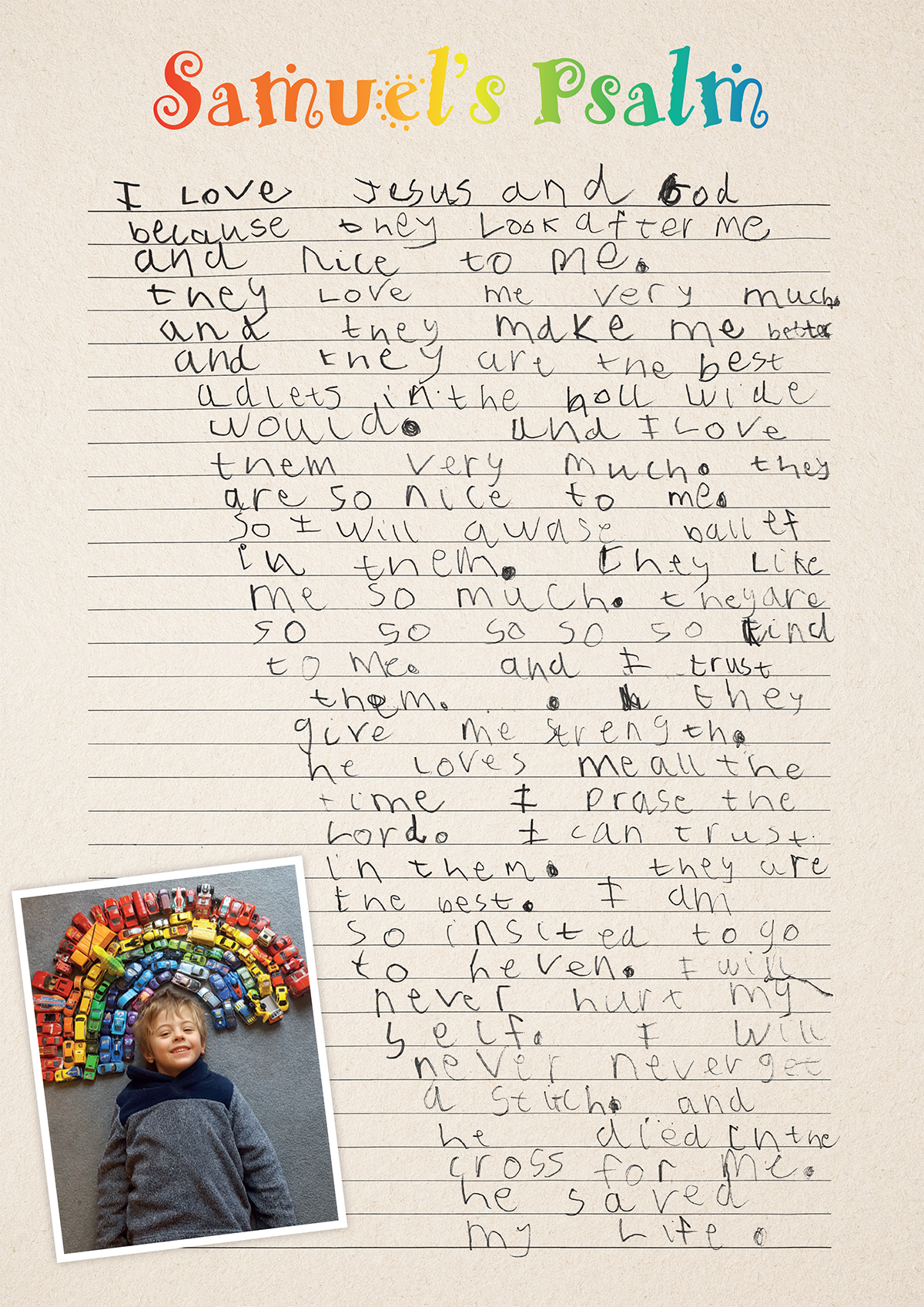